The episode stars out in a building where Cerabella is showing three teenagers a video used to hypnotize them into savage acting humans.

Next we see Charlie practicing with his band, Freddie then asks him "Tell me we're not ready to play the school dance, you heard the applause." Charlie then states that "Dude that meant nothing your, cousins clap when the phone rings" . Charlie then states that they still can't audition for the dance because the still don't have a drummer (and their drum machine is suffering from Freddie smashing it). Freddie then says that Chase Ravenwood is head of the dance committee and it would impress her if he got the gig, Charlie then says that he'll do it...IF they can find a drummer. Later that night when Charlie is playing Hero Rising (With Vas and Ram) he uses a solar burst to escape some enemies. After that Jason walks in to use Charlies' computer (to use Buddyverse).As Jason talks to Vas and Ram about the "Massive Onion" premiere he hears loud drumming coming from Emma's house. Charlie then yells over for her to turn down her music, where she states that she's practicing her drumming, Jason joins the conversation and says that he thinks it's cool that she's a "Drummer Chick". The Next Day the band is practicing with Emma as their drummer. Later when Charlie walks into the house he see S.T.A.N. continuously walking into a wall. S.T.A.N. says that hall has a message for him: We found these teens roaming the streets two days ago they were normal kids, we ran tests and there was only one explanation Brainwashed. Only one person is capable of that kind of mind control Cerabella. She plans on sabatoging a music video premire on Buddyverse. 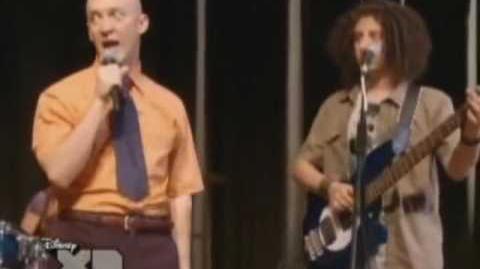