Kelly was born in 1987 in America. Blatz has starred in American and Canadian films.

In addition to acting, Blatz is also musically talented. He is the lead singer of the Los Angeles based band Capra. Blatz was excited to be able to have his Aaron Stone character, Charlie Landers, also be in a band because it was reflecting something the actor enjoys in real life.

Blatz gained some media coverage when he briefly dated actress Blake Lively, but the two are split and Blatz is now private about personal relationships. Lively and Blatz met on set of the movie "Simon Says".

Blatz made his debut in "The Oakley Seven" in 2006 and has pursued acting ever since. However, Blatz wasn't a very well known name until landing the lead part in "Aaron Stone".

Prior to his Disney fame, Blatz mainly made appearances in movies- specifically horror movies such as "Simon Says" and "Prom Night". Blatz made a few minor cameo appearances in shows like "Zoey 101".

Since Aaron Stone, Kelly starred in a movie called "April Showers" (2009) which played in select theaters. He also made an appearance on the Disney Channel show "Sonny With A Chance", along side Demi Lovato and Blatz's real life buddy Sterling Knight.

In February 2009, Blatz was part of an Aaron Stone panel at Comic Con in New York, along side costars JP Manoux, David Lambert, Tania Gunadi and writer Bruce Kalish. Jesse Rath wasn't on stage, but in the audience.

Blatz also attended the Princess Protection Program movie premiere, along with JP, David and Tania. However, due to the second season filming of Aaron Stone, Blatz hadn't had the time to make many Summer 2009 premiere appearances.

As of June 2009, Blatz has been filming the second season of Aaron Stone and he has a non Aaron Stone related Disney XD original movie set to premiere soon. 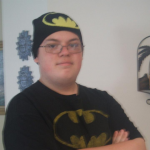