Hunter is a new model android designed to be and act like a teenager. Mr. Hall has Hunter replace Stan because he and Aaron lost launch codes to General Cross because Stan can not harm humans.

Mr. Hall then calls Charlie and gives him Hunter who can fight humans if need be. Hunter then suggests a code 10 (deactivation and meltdown) on Stan and Mr. Hall agrees. While at Charlie's school everyone seems to really like Hunter but Charlie is skeptical about the change.

He then gets a call from Mr. Hall on how General Cross plans on using the launch codes obtained earlier in the episode. Charlie goes to fight but Hunter offers to take down the guards himself. The general, although impressed, then shoots Hunter in the chest damaging him. Later, while playing Hero Rising with Charlie (AKA Aaron Stone), he begins to act strangely. The blast damaged Hunter and rewrote his program from protecting Aaron Stone to now destroying him. They both then fight in Charlie's room and Charlie is able to get away by locking Hunter in his closet although that doesn't hold him for long because he busts out.

Charlie and Emma then call Mr. Hall to tell him that Hunter has been damaged and he's trying to kill Charlie. Mr. Hall tells them the only way to stop him is with a depleter. Hunter then calls Charlie disguising his voice to sound like Charlie's mom. Charlie tells his "mom" to meet him at a park.

Hunter came to the park with a blaster intended to finish off Aaron Stone. Then Charlie as Aaron Stone shows up to take him down. Charlie put up a good fight but when he accidentally depletes his own armor it looks like he's finished until Stan shows up. The two androids fight and Hunter loses to Stan.

Being an android, Hunter most likely has all the same functions as Stan. 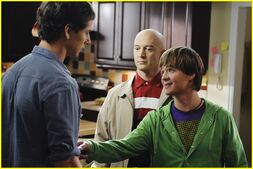