Dark Owl was the original special agent of T. Abner Hall. He was first seen in Hero Rising part 1.

Dark Owl was only seen wearinh dark Clothes and a grey trench coat. He didnt have any known weapons but used a mop to fight SoulJacker.

Dark Owl appeared at the beggining of "Hero Rising pt. 1," chasing Souljacker through a city. He fought him using a mop, but was defeated and maybe killed being labled as "compromised". 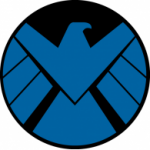